Catch up time again – it has been amazingly busy, and with the gorgeous weather, who wants to really sit and write?  But here are the adventures I tackled this month.

Sapotes, which is a word used for several different types of fruits across about three plant families, but which in my case I believe applied to the Mamey sapote (Pouteria sapota), which is from southern Mexico to northern South America. (Safeway does not put species names on their labels, so how can one be sure?). 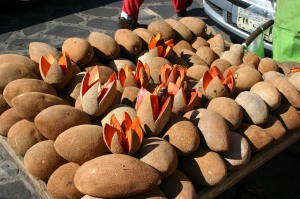 I was not expecting the interior – which kindof grossed me out at first because it looked like two mussels were inside of it a soft red/orange/pink mushy interior.  The seeds are huge, black, and clam shape with a white, somewhat furry “opening” that looked like a clam mouth.

But once you take those out, and taste the fruit’s flesh itself, it is pretty decent.  The texure is very much like a papaya, but a blander taste, with a slight hint of lime perhaps? I don’t think I like it by itself, but, as several websites suggest, it would be good in a smoothie – especially if mixed with mango.

I was an usher for a private screening by the Appalachian Trail Conservancy for the new movie “A Walk in the Woods.”    Not exactly an earthshattering, exhausting volunteer activity, but still cool, something I had never done before, and helpful to the ATC.  The movie stars Robert Redford and Nick Nolte as old acquaintances who walk part of the Appalachian Trail together, and their mini adventures, and comes out September 2nd.  It is based on the book of the same title by Bill Bryson, which I love.  The book – and movie are  funny, heartwarming, and have beautiful scenery depicted.  Yes, as a plus for ushering, I got to watch the film.  And, while manning the entrance, before the movie started – I sortof got to hear the director Ken Kwapis give a welcome speech, as well as some ATC folks.  I think it was Kwapis.  It was a “director” of some sort.  Anyway, a nice evening, and of course I recommend the movie!

I can’t believe that in the 22 years I’ve lived in DC, I have never been to Annapolis.  That FINALLY changed this month.  All I have to say is that is it absolutely beautiful (beyond the main tourist strip), is one of the cleanest cities I have ever seen, is filled with great old architecture, has more young kids in white Navy uniforms than I expected, and has an ice cream store on every block.  I would have taken more pictures, but I was with a friend, and didn’t want to hold up the wandering by taking pictures of old houses, their doors, birds, drones, and more.  But here are a few photos.

Onward to next month!

Through the work of our two climate policy interns from Carleton University, Azka and Anshika, we have compiled a list of court cases in which individuals have made a difference – either through filing suit against polluters or governments, or by giving their personal testimony. So check out our new page; we’ll continue to add … END_OF_DOCUMENT_TOKEN_TO_BE_REPLACED

The Paris Agreement, the USA, and You

It is during such times that we realize the power individuals hold towards determining the future of the world.

A Tool Library Is a Seed

or How Collaborative Communities Can Reduce Global Warming….

According to the United Nations, the climate crisis has become the defining issue of our generation. With the legislative and executive branches of states around the world failing to act, however, the judicial branch often remains the last resort to address the growing human rights and environmental crises. Learn more on how you can take … END_OF_DOCUMENT_TOKEN_TO_BE_REPLACED

“….this past winter the ground never froze, so we have a banner year for destructive insects…”

Wind up Plastic-Free July by spending some time with us learning what is plastic, its impacts – good and bad – including on climate change, and how to fight plastic pollution throughout the year. Dr. Annette Olson, Founder of Climate Steps and the Lead for Green Neighbors DC, and guest Den Fusso, plastic activist, will … END_OF_DOCUMENT_TOKEN_TO_BE_REPLACED

Announcing a new resource page for Climate Steps – Podcasts, which has reviews of 13 informative podcasts in the areas of climate science, how climate change affects us, the all important climate solutions, and then the environment in general. Three of my favorites are: The Mint Climate Change Tracker, which provides an overview of climate … END_OF_DOCUMENT_TOKEN_TO_BE_REPLACED

Hey again. There’s a campaign that’s been growing yearly, which started in Australia, to make July Plastic-Free. https://www.plasticfreejuly.org. If you are wondering about how plastic relates to climate change, it significantly causes it: Plastic comes from natural gas and oil – methane is released during drilling; CO2 is released during manufacturing; There’s transportation to a … END_OF_DOCUMENT_TOKEN_TO_BE_REPLACED

What is a Climate Step?

….it is one way we show our respect for the sufferings of others…

Why We Must Stop Asking for New Roads

….people don’t behave like water molecules. Whenever a new road is opened, we change our behavior.