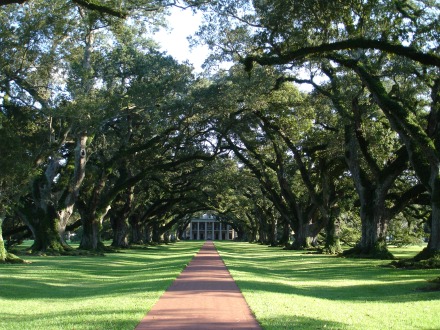 An ironic next adventure. Last month’s new activity took me to the Martin Luther King Jr birthplace in Atlanta – the fighter for black civil rights in the 1960s. This work trip took me to Baton Rouge, Louisiana, and to an pre- (and post-) Civil War era plantation of the 1860s, the Oak Alley Plantation to the south. My god, it really drove home the point that people kept others as slaves. How incredibly beautiful the house and grounds were, but they were built by a couple – two people – who kept enslaved two hundred people, made them do back breaking work in the sugar cane fields, and sold them and bought them at auction, all so they themselves could be rich. Humans can really stink. Additional case in point:  according to the recently added slavery exhibit, apparently the only way those kept as slaves could get enough food was to grow their own gardens – the couple, like traditional slaveholders, did not provide enough in the way of rations.  Burns me up.

I reflected later about the physical beauty of the Oak Alley plantation, and I realized that although the house has been raved about and visited over decades, and the recently recreated slave quarters now tell the full, sad story, the main draw of the property were the oaks.  The great, old, grand trees are the focus of the attention throughout the property (and the reason I had chosen that plantation to visit).  It made me feel a little better that many people were visiting this place in order to appreciate nature and the beauty that can grow if allowed enough time.  I know I will remember the sadness of the slavery exhibit and the beauty of the oaks – and not so much the names of the owners or the house.  There are many gorgeous houses in the US built without slavery – but how many trees are over 300 years old in one place?

Here are the photos of the oaks, the indeed beautiful house, and the recreated slave quarters.

Oak tree along the walk

A branch so long and heavy that it is growing into the ground.

The guide, in period costume, explaining how flycatchers worked (near the overhead fan that a young slave boy would swing.) 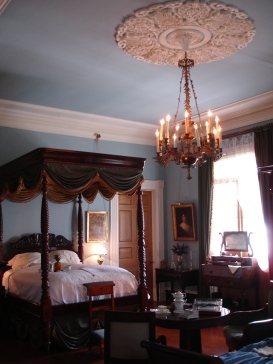 The main bedroom, a contrast to the earlier bedroom shot. 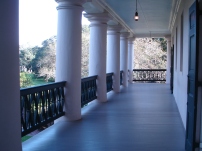 View from the verandah. 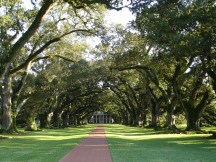 Looking bck towards the house.

Oh, and then another new thing I did this trip was eat in the Shaquille O’Neal breakfast buffet area.  Not many can say that.  It is at the Cook Hotel, an alumni-run hotel on the LSU campus.  Photographic proof below. 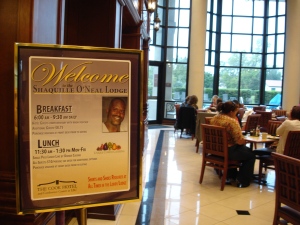 Then, after all of that, I drove to New Orleans, one of my favorite places in the world and even more precious now with the seas rising.

Btw, I am not a fan of Bourbon street – but am of just almost every other street of the French Quarter.  Also, one thing I just read in an National Park Service exhibit is that many free men worked to build New Orleans, which is great – although I know the city also had its tragedies.  But what a great place now.

Another plantation just down the road from Oak Alley.

Pipes carrying water from the Mississippi river on the left to industries on the right – all along the river drive. 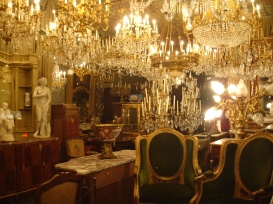 A walk at night…

The Royal Charles, one crazy lobby.

New Orleans in the day 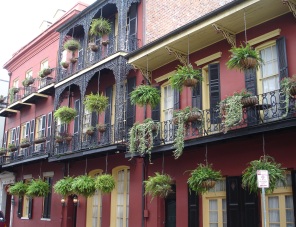 The Lafitte House courtyard, now a National Park Service site and a great respite from the bustle of the city when you want to rest your feet.

Mind-blowing street music (and a baby) 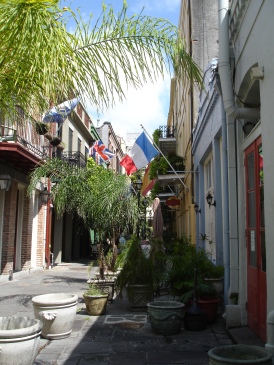 A shotgun house. So cute!

A great picture to end a post about human rights with…

A Quick Update on The3Engineers, Who Figured Things Out

…, but how they planned, collaborated, and tested the project. A decision is only the first step…

How Do You Show Your Love for the World?Let these 5 climate actions be your love letter to the Earth

…showing our love for our singular home, the one and only planet that supports our very lives.

A Fascination on Ice

I’m a neophyte iceologist, just a few years in to studying one of the beauties I love most, keenly aware of its fragility, the rarity of clear ice …

A Greenish Curriculum: Desperate Need vs a Stacked Deck

The facts are in. The global temperature is rising and so are the oceans, accompanied by increasingly frequent and intense fires, droughts and floods, out-of-season melting of polar ice, glaciers and mountain snowpacks (the source of much of the world’s fresh water), all of which are predicted to get worse. In the scientific community, there … END_OF_DOCUMENT_TOKEN_TO_BE_REPLACED

Although we’ve been a registered nonprofit in Washington DC since December 2020, we’re now (finally) federally registered as a tax-exempt organization by the IRS! That means donations are tax-exempt for contributors (hint, hint). Thank you to Barry Hart and Laura Gregory of the law firm K&L Gates for their pro bono efforts in helping create … END_OF_DOCUMENT_TOKEN_TO_BE_REPLACED

Now is the Moment to Pressure Global Leaders to Step Up Their Climate Game.

By Dr. Krista Kurth, 10/11/2021 Dr. Krista Kurth has given us permission to repost her very timely and action-focused blog: https://www.climateactionforeverydaypeople.com/post/now-s-the-moment-to-pressure-global-leaders-to-step-up-their-climate-game Here’s what you can do to help up the ante before COP 26 With the Global Climate Conference (COP 26) coming up on October 31, 2021, it’s time to let the leaders in your … END_OF_DOCUMENT_TOKEN_TO_BE_REPLACED

For the new, next level Climate Steps (aka the version 2.0 that is coming), we have new logos, care of the pro bono work of designer Clare Talbot, of http://www.clarevoyant.com, and our Facebook group’s major voting and feedback. One result – a logo series that tells the story of what we are about – reversing … END_OF_DOCUMENT_TOKEN_TO_BE_REPLACED

By David Schwartzman….free transportation, …. [results in] money saved in hospital admittance due to asthma, in ambulance and police services, in paving and repaving, …..

Today, I woke up at 8:00 am to read about the 2021 UN Intergovernmental Panel on Climate Change (IPCC) Report being released:  https://www.ipcc.ch/report/ar6/wg1/; https://www.nytimes.com/2021/08/09/climate/climate-change-report-ipcc-un.html. The 14,000 studies behind it yielded a consensus on what many of us in the climate arena expected – we are basically locked in at 1.5 degrees Celsius more warming. We … END_OF_DOCUMENT_TOKEN_TO_BE_REPLACED

Reflection, in Honor of Plastic-Free July. This is a waste basket, the kind made out of waste. The broken base of it came from the free box of a garage sale last Saturday. The plastic ribbons are single-use plastic packaging used to ship construction materials: three of the four colors picked up off the floor … END_OF_DOCUMENT_TOKEN_TO_BE_REPLACED