I am catching up on the posts.  Work has been intense, but so has spring fun – who wants to sit and type when the weather is gorgeous?   But I did go back to the Tech Shop a little over a week ago, trying that “something new” I’ve sworn to do each month.  The class was laser cutting, which is basically using a laser to cut patterns into materials, such a wood, metal, glass, some plastics.  (Tech Shop, btw, provides major power tools for almost any construction/innovation project you’d like to try out; previously I learned how to use table saws and other powerful woodworking tools.)

Think about it for a moment – lasers.  Man, the future is so here, but somehow it has become so commonplace, that we forget that things like lasers, computers, drones, and lab-grown organs didn’t exist 30-40 years ago.  (Okay, the lab-grown organs probably give us pause, those are still underdevelopment.)

I may be a little bit older than many who read this (yes, I am more than 40 years old), but I remember watching as a kid (a young kid) a Public Television Station program about lasers being invented/built.  I remember seeing a red beam going through a prism, and the techniques used to organize the photons to yield precise light beams.  The show mentioned the future where real lasers would not only transfer light, but having the power to cut things.  And, of course, around the same time, I was watching every Star Trek episode with my very cool Mom, where phaser power showed the potential.  Nowadays we have laser emitting diodes (LEDs), laser levels, and, yes, laser cutters.

So last week, I actually wielded the power of a laser cutter, to cut apart molecules of substances.  Okay, so admittedly, the laser operated within a box and it was difficult to see.  And I didn’t actually cut anything, more like etched the paint off of a piece of metal.  And it felt like sending a picture on a computer to a printer.  But really, I used light to cut.  Pretty cool.

Here’s what little you can see when it is actually operational.

Anyway, the class taught us how to use the tool, so we could come back and utilize it for whatever art we wanted to try.  So, for practice, the teacher had us etch metal dog tags.  The detail was amazing.  My resulting work of art:

Other works of arts in the case. 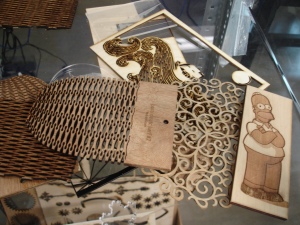 Basically, you use input the pattern you want into a software program, determine material type, and thickness, and hope you planned well enough that you don’t set fire to things.  Which has happened.   Just not on my watch – it was actually pretty  anti-climatic to just etch a metal dog tag.   But I especially liked how detailed the laser cutter could cut.  Some classmate’s patterns were even more detailed than mine, which came out beautifully.

So that’s it.  If I was to pay a membership fee to TechShop, I could go in and use the laser cutter anytime.  I just need the time to start getting creative! 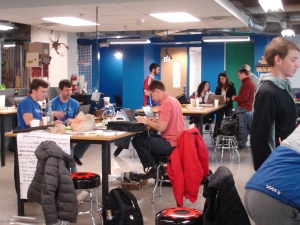 Folks being creative at Tech Shop.

P.S.  Thanks Mom, for getting me into Star Trek and Dr. Who (and Tarzan and Phillip K. Dick).

A Tool Library Is a Seed

or How Collaborative Communities Can Reduce Global Warming….

According to the United Nations, the climate crisis has become the defining issue of our generation. With the legislative and executive branches of states around the world failing to act, however, the judicial branch often remains the last resort to address the growing human rights and environmental crises. Learn more on how you can take … END_OF_DOCUMENT_TOKEN_TO_BE_REPLACED

“….this past winter the ground never froze, so we have a banner year for destructive insects…”

Wind up Plastic-Free July by spending some time with us learning what is plastic, its impacts – good and bad – including on climate change, and how to fight plastic pollution throughout the year. Dr. Annette Olson, Founder of Climate Steps and the Lead for Green Neighbors DC, and guest Den Fusso, plastic activist, will … END_OF_DOCUMENT_TOKEN_TO_BE_REPLACED

Announcing a new resource page for Climate Steps – Podcasts, which has reviews of 13 informative podcasts in the areas of climate science, how climate change affects us, the all important climate solutions, and then the environment in general. Three of my favorites are: The Mint Climate Change Tracker, which provides an overview of climate … END_OF_DOCUMENT_TOKEN_TO_BE_REPLACED

Hey again. There’s a campaign that’s been growing yearly, which started in Australia, to make July Plastic-Free. https://www.plasticfreejuly.org. If you are wondering about how plastic relates to climate change, it significantly causes it: Plastic comes from natural gas and oil – methane is released during drilling; CO2 is released during manufacturing; There’s transportation to a … END_OF_DOCUMENT_TOKEN_TO_BE_REPLACED

What is a Climate Step?

….it is one way we show our respect for the sufferings of others…

Why We Must Stop Asking for New Roads

….people don’t behave like water molecules. Whenever a new road is opened, we change our behavior.

Stuck at Home, yet Saving the Climate….

Need a list of things you can do to save the planet while stuck at home or in the yard, self-isolating? Well, there’s no need to binge-watch shows you aren’t interested in. Instead …

….cover the one-species grass lawn of death with cardboard, loads of compost, and then mulch. Then plant new native plants in….